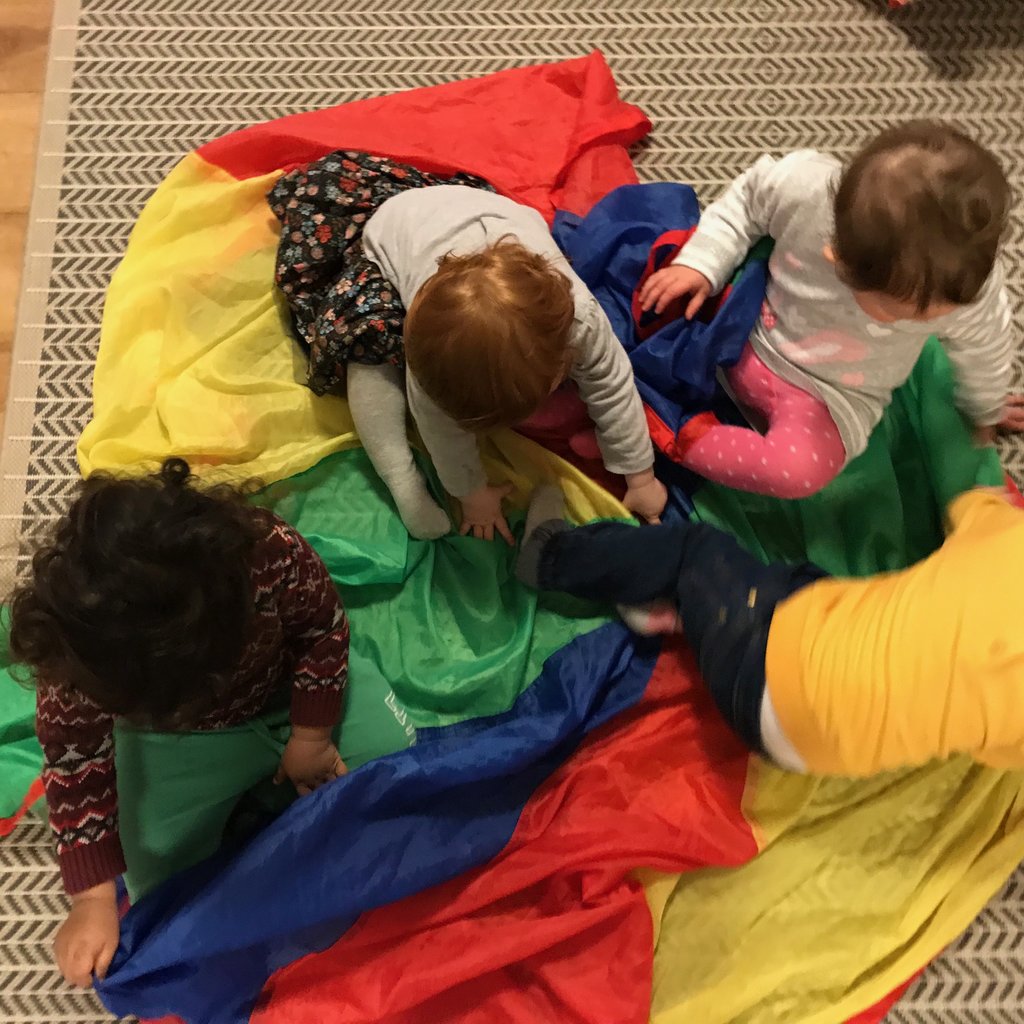 One of the children´s favourite games is the Parachute. We have played so many parachute activities, they keep my group of children so busy and entertained. Parachute games can help kids with social skills, coordination, and fine motor skills. It is great for a single child or a large group of kids.

These are a few games that we love to play. I got some of these ideas from group classes such a Gymboree. You can do so many things with a parachute, you are only limited by your imagination.

Parachute Ride: Have the kids sit in the middle of the parachute with the adults on the outside. Roll up the sides of the parachute until it is taught. Then walk around in a circle so the kids can “ride”. It is fun to sing a little song like “Ring around the Rosy”.

Make Waves: Sit around the edge of the parachute and grab the handles. Shake the parachute to make “waves”. You can do them really fast and then really slow.

Popcorn: Place some softballs or toys in the middle of the parachute and shake the sides to watch them pop up and down.

Ball Roll: Have everyone sit in a circle and place a ball in the middle. Try to keep the ball going in a circle by lifting up the parachute when it gets close and then lowering the parachute once it passes you.

Parachute House: Raise the parachute high above your head and take two steps in. Quickly pull the parachute behind you to trap all of the air and you have a little parachute house. You can sing songs like “Twinkle, Twinkle”.

Red Rover: Raise the parachute above your head and call out two kid’s names. They have to run and switch places before the parachute comes back down.

Ball in the Middle: Lay the parachute flat on the ground. Have kids roll balls so that it gets in the circle in the middle of the parachute. Whoever gets the closest wins!

Tickle your Toes: Have the kids lay on their backs with their toes in the air. Bring the parachute up and down so it tickles their toes.

Soft Landing: Take an inflated inner tube and put the waded up parachute in the centre. Have kids hold your hand and jump off a small chair or beanbag chair into the centre of the inner tube.

These are just a few of the parachute games I play with my little friends. They had such a blast. I really see they imagination working and we all get a workout 🙂